Great news is that the Captains Bar is to be open again on Tuesdays and Allan’s session restarts from next week Tuesday 28th September from 3-6pm. All welcome to come along to share some songs, tunes and craic.

In addition to his solo gigs Allan Johnston presently appears with the Allan Johnston Band, and the Old Felix Jug Band. The latest news on all of these and on his most recent CD “On The Muse” can be found on this page.

New Page – Trad Song Archive.  Early 2020 Allan created a Trad song archive with 57 Trad songs recorded and uploaded to SoundCloud.  This can be accessed via a new page on this web-site’s menu with links to the archive.  Click on Trad Song Archive on the menu (top right of the header) for access to the new page and links to SoundCloud. These recordings of Trad folk songs that Allan has learned and sung over his +50 years on the folk scene are being made freely available to all in his hope that the songs will be passed on and continue to provide as much pleasure to others as they have given him. Information on the songs and who and where they were learned from is attached to the SoundCloud web-site song files.

Sadly the Old Felix Jug Band session in Edinburgh’s Captains Bar on Tuesday 24th March 2020 had to be postponed due to the Covid-19 virus scare. An update will be provided once a new date has been arranged.

The Captains Bar afternoon sessions are hosted by Allan from 3.00-6.00pm every Tuesday afternoon. and there have been some great musicians and singers coming along.  Everything was going very well prior to lockdown and hopes are high that the resumed session will now pick up from where it left off. Allan’s sister Gilly Hewitt is one of the regular attendees and with their brother Johnny having retired in early 2020 both Allan and Gilly are looking forward to him at last being free to join them and all the other excellent local musicians and singers who turn up on a weekly basis. An eclectic mix of traditional and contemporary folk and blues accompanied by guitars, banjos, fiddles mandolins and moothie is the norm with all welcome. The venue is the Captains Bar, South College Street, Edinburgh (just round the corner from the Festival Theatre). All songsters and tunesters welcome.

Our most recent  Old Felix Jug Band session was in MacGregor’s Bar, Inverness on the afternoon of Saturday 13th April 2019. A fair squad of friends from Ayr joined the band in the trek North to Inverness which is home to band member Bruce Law. This was the band’s first appearance in what is a fairly new Inverness venue and the band and entourage much enjoyed the gig as did the locals. All of us still greatly miss our great friend band member Iain Baird, who is always very much in our thoughts and plan to continue meeting, playing and sharing the craic a few times a year in Iain’s honour. In the present band line-up the four surviving original members are joined by long time pals Bob Black (dobro) and Jim Mackie (mandolin) increasing our ranks to a six piece.

2016/2020. Most of Allan’s 2016/19 gigs were solo performances or Old Felix Jug Band sessions, his most exciting venture of that period being an October/November 2016 trip to Australia, with solo gigs at the Fleurieu Folk Festival www.fleurieufolkfestival.com.au and a trip to play at the Edithburgh Community Festival on the remote Yorke Peninsula with Liam Flynn, Pat Organ, Paul Roberts and the rest of the Adelaide Irish music crew . Pat Organ is a great button box player from West Clare (near Milltown Malbay) and a great leader and stalwart of the Adelaide Irish sessions. Liam Flynn is another fine box player and you will find both Pat & Liam leading the session most Friday nights in Adelaide’s Governor Hindmarsh Hotel. There was also some enjoyable time spent visiting Perth (WA) to share some music, craic and a wee bit of fishing with Stuart Law, a great singer/guitarist and pal from Ayr and much earlier days. So far in 2019/20 most of Allan’s appearances have been in Edinburgh pub sessions including his Tuesday afternoon Captains Bar session and others in Sandy Bell’s and the Waverley Bar.

View the only vintage video clip that exists of The Old Felix Jug Band in their prime. This clip is from a 1970 concert in the Kildonan Boathouse, Isle of Arran and was filmed for BBC by a freelance TV crew as part of a film about the island. The song is Evolution Mama, an old song from the 1920s. YouTube

The duo of Allan Johnston & Mike Slessor share a 50 years history of playing together in various bands and a vast and varied repertoire is the result of this. Here are the links to five videos providing a sample of their music.

The Music O’ Spey & The Laird Of Drumblair YouTube

A solo performance of Allan’s song “Plea From Gaza” sympathetic to the plight of the Palestinians on the Gaza Strip.  Unfortunately the horror and Israel`s aggression continues.  YouTube .

Scientific Man – Shit Happens – The Man In The Water Of Leith YouTube.

The “On The Muse” CD

Allan’s fourth album “On The Muse” was released on the Cora-Linn Records label with a launch concert in Edinburgh on Saturday 6th April 2013 when the 5 piece Allan Johnston Band was joined on stage by Allan’s brother Johnny on backing vocals in Leith Folk Club’s regular Tuesday night venue, the Victoria Park Hotel, Leith. The launch was followed up with gigs in Hootannany’s, Inverness, Wellingtons Bar, Ayr, a double bill with the Jo Philby Band in the Voodoo Rooms, Edinburgh and an all acoustic Edinburgh Fringe gig with an all singing audience in the convivialities of the Royal Oak.

Check the Gigs page, watch this space or send Allan your e-mail address to be kept informed. Thirteen original songs and two Scots trad ones make up the fifteen album tracks with Allan performing all vocal, guitar, bouzouki, moothie and banjo parts. Mike Slessor, on fiddle, has played alongside Allan in various bands since they first played together in “The Old Felix Jug Band” in the late Sixties. Billy McMillan plays bass & keyboards and Andy Munro plays the drum-kit. Tom Napper joins the band on backing vocals, mandolin, octave mandolin and tenor banjo for live gigs. The album is split 50/50 between the lighter acoustic songs and those featuring bass and drums. The new songs are musings on life and the world around us, all written over a 3 year period during 2009–2012. They include humour, social/political comment, community protest, a song for world peace, a homage to Robert Burns, anger, affection, tongue in cheek philosophy and lots of catchy choruses & melodies. The album has been reviewed by David Kidman for The Living Tradition magazine. To read the review go to the foot of this page. 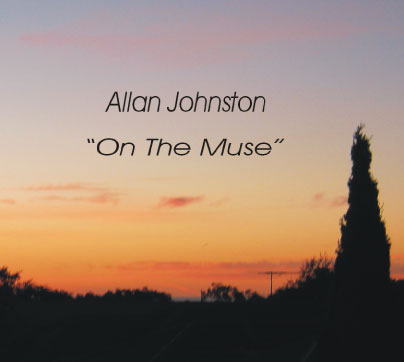 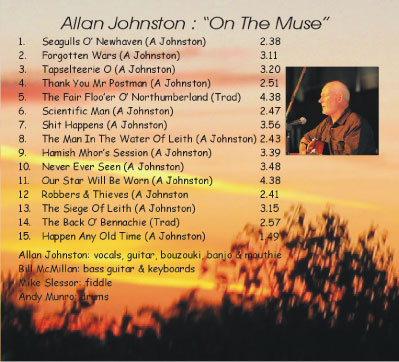 Look out for Allan, Mike and Billy plus Tom Napper (mandolin, octave mandolin & vocals) performing live as The Allan Johnston Band. Andy will join them on drums for the larger venues.

Digitally recorded between 2009 & 2012 in Allan’s home in Newhaven (Edinburgh and Leith’s historical fishing village) a final master was completed in Pier House Studios, Granton, Edinburgh in November 2012. Early mixes of some of these songs, included in special edition CDs taken on 2009 and 2011 tours of Australia and New Zealand, have been enhanced through remix, final mastering, or both.

Go to the Albums pages of the website to listen to free MP3 clips from “On The Muse” and previous recordings where, as well as album descriptions and reviews, full lyrics to Allan’s songs can be viewed and downloaded. You will also find links for on-line purchase of CDs or MP3 files of tracks of your choice from the new album.

Review by The Living Tradition

Allan’s long CV stretches from the late 60s, first being a regular face at Ayr and then Edinburgh folk clubs (at the latter forming the band Wee Willum with future members of Jock Tamson’s Bairns), then developing a keen awareness of the links between the Scottish and Irish traditions. He’d already started writing, and shortly after the time of his first album (North Of The Border, 1989) other artists, among them the bands Ravenscroft and Craobh Rua, were covering his songs. Two more albums followed (Voicecall and Hey You, in 1999 and 2004 respectively), and although much of the interim time has thence been spent in happy collaboration with other musicians, Allan’s still well able to retain and develop his own distinctive writing and performing personality, as album number four, On The Muse, demonstrates.

It’s a straight-down-the-line, honest collection of self penned material – that is, all but two of the 15 tracks (those being better-than-decent accounts of trad Scots songs The fair Floo’er O’ Northumberland and The Back O’ Bennachie). The tracklist more or less alternates the lighter tongue-in-cheek and/or genially humorous pieces with what might be termed old-fashioned protest songs (that’s not a criticism). The latter tend to sport fuller musical arrangements involving bass and keyboards (Billy Mcmillan), drums (Andy Munro) and fiddle (Mike Slessor), whereas the former tend to be sparsely scored for just Allan, his guitar, bouzouki, harmonica or banjo – enabling maximum concentration on the lyrics.

My favourite track’s probably Tapselteerie O, a delightfully puckish commentory that forms a kind of sly celebration of Burns’ 250th birthday, rather like a cross between Robbie and Robin Williamson; but the simple cheery humour of Thank You Mr Postman and Seagulls O’ Newhaven is irresistable too, and very catchy. As is Hamish Mhor’s Session, a fine tribute to larger-than-life session host “Big Jim” Knight. Whereas other songs, like Scientific Man, Never Ever Seen (concerning the plight of the homeless) and Robbers And Thieves (a Dylanesque slice of global protest) are altogether more questioning, and certainly deserve your close attention. As do the pair of songs in affectionate celebration of sunny Leith.

Yes, Allan’s given us a thoroughly likeable collection here; so look out for some tour dates during the course of the next few months, on which Allan will be joined by the aforementioned Mike, Billy and Tom Napper, and sometimes Andy too.