« back to albums
mp3 clips are each 1.83Mb in size.
All tracks written by Allan Johnston except where indicated. 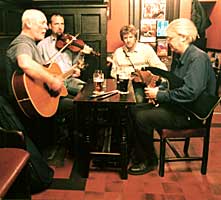 Hey You consists of 7 original songs, 4 Scots traditional songs and 3 tune sets, these being a set of Irish jigs, a Scottish strathspeys & reels set and a waltz written by Perthshire based fiddler Pete Clark for Allan’s parents’ Golden Wedding in 1996.

This is the first album where Allan has included songs from the Scots tradition alongside his own compositions.

Further evidence of traditional influence is provided by his chosen accompanists Harry Lawson on uilleann pipes and whistle, Mike O’Malley on button box and Gavin Pennycook on fiddle, all well known and accomplished traditional players currently resident in Edinburgh and members of Allan’s 4 piece band Skelf.

With Allan doubling up on guitar and octave mandolin for much of the album as well as singing all lead and backing vocals the result is a very full and traditional sound with strong vocal harmonies, tasteful instrumental arrangements and strong tunesets.